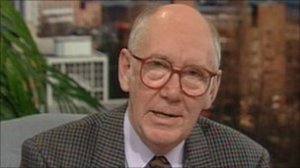 Bob Greaves was one of the most recognizable and best loved of Granada’s presenters. He joined the company in 1964 as a reporter and editor for the regional news magazine programme Scene at 6.30 and went onto work for Granada for 35 years, mainly in local programmes.

He sadly died in 2011 and his obituary from the Independent newspaper written by his former colleague and fellow presenter, Gordon Burns, can be read here.

I joined Granada Television in 1963 as news editor and my connections with television before that had been nil. I had worked in newspapers all my life, so it was a culture shock. I didn’t know what I was entering into but from day one, I was privy to the canteen culture at Granada and there I used to meet and eventually join at their tables the Coronation Street cast of those far back days.

I have a lot of affection for the Street as a series and a lot of affection for many of the people, some of whom are still there, but for many of the originals. It was obviously, and still is an ongoing drama series – they hate the word soap – it has always had quality – quality producers and most certainly quality writers; it’s had a lot of quality directors but more importantly it’s had a lot of quality actors and actresses, many of whom had huge personalities, most of whom were very likable people.

My impressions were that the cast in the sixties were themselves a community. They got on well, though, yes, you used to hear about the odd argument and dislike between one person and another although that’s natural in any group of people who are working together whether on a building site or whatever. But most of them were a real life community – they socialised together, they worked together, they had their lunches together in the cannie.

Most of them had no side on them. You’d go and sit with Arthur Leslie who played Jack Walker who simply was a very, very nice, interesting man. He hardly knew me but he would welcome you to his table and regale you with stories.

Some of the people haven’t always been very nice, Arthur Lowe who played Leonard Swindley always seemed to lord it to me. Brilliant actor but a difficult man. Knew what he was, what he wanted, not the most charming of people.

Then there was Albert Tatlock played by Jack Howarth. He was always a bit of a crusty man, not the character, the real man. Not an easy man to get on with but I’m maybe maligning him. He played a grumpy character and he could be a bit grumpy in real life as well. Legend has it he and his wife used to stay at the Midland Hotel because he and his wife lived in Wales, so they stayed in the posh Midland hotel just up the road from Granada, 800 yards or so away. He used to take the bus from The Midland to a bus stop outside the side of Granada’s building. Why he didn’t take a taxi on wet days, which in those days would have cost him a quid or so. But what I do know is that he used to get on the bus and apparently argue with the bus conductor at having to pay a fare. He would say ‘I’m a pensioner, you’re charging pensioners!’ This was in the days when there were no concessionary fares for 65 year olds. He used to resent paying his bus fare, which was probably two pence.

What developed, certainly in my mind was that the women characters were the strongest characters in the series and I think that’s probably still true to day. The women shine in Coronation Street. Now whether that’s deliberate or accident I don’t know. My guess is that it evolved.

The men I always thought were – not second rate – but very much second to the women. I’m trying to remember if any of the men had that swagger. No, they didn’t. One or two were arrogant but they were probably the younger ones. But there was no genuine air of authority. They probably thought they were something special but they didn’t exude that I’m-me-behave-yourself attitude. I’ve always loved the female characters. Julie Goodyear also had that don’t-you-realise-who-I-am approach. I don’t mean she’d go in a shop and say don’t you know who I am but there was that aura about the big female characters. In this day and age although I don’t know many of them as I used to know the older ones, there is Liz Dawn who plays Vera and is a personal friend. She plays that simple woman brilliantly but is one of the most warm hearted and generous people in the acting profession that I have ever known. My wife Sonia works as a fund raiser for a charity called disabled living and I know that you only have to pick up a phone and ask Liz Dawn who has a busy schedule. Talk to her and in between filming she’ll nip out and show herself at a fundraising do, at balls, dinners, gala events, anything to do with helping a charity. She also runs her own charity in Leeds. She is one of those quietly generous women who never looks for thanks. She’s lovely.

Somebody like Sarah Lancashire who played Raquel is I think a superb actress and once she had left the Street it was obvious she hadn’t been playing herself. Her offscreen voice and demeanour is totally different to the character whereas there have been lots down the years who played themselves and are probably not very capable of playing anyone other than themselves.

Pat Phoenix was one of the queens and of course both she and Ena were both big women. Violet was not as tall as Pat but they both had that I’m -someone-special air about them. You had to open doors for Pat Phoenix and she would give you that smile and say ‘thanks chuck or thanks pet. Doris Speed who played Annie Walker for longer than I care to think was another one in the queenly mode. They had a whole series of these big, strong female characters.

Violet Carson was a bit of a tartar, a friendly enough woman but not the sort of woman you could, or I could, get close to. I remember vividly one day walking down the corridor that led to the wardrobe and makeup departments were a lot of the dressing room were. I was walking along and there were two sets of double glass doors. She had entered the corridor and was walking towards a set of doors and she was probably ten or twelve feet from the doors. I was coming in the opposite direction 50,60, 70 feet away. There was no way she was going to open those doors before the man – i.e. me, scurried to open the doors for her. She was the Queen and you do not expect real queens to have to open doors. She would stand there until you scurried along and opened the doors. And then she would give you an imperious wave or a shimmy of those Ena Sharples hips and sasshay through with hardly a word. You didn’t get thanked for opening the doors. It was expected because she was the queen.

Jean Alexander who played Hilda for all those years could turn her hand from anyone from Hilda to playing any Shakespearian role of her choice. Real actors, nice people. Going back to those who fell by the wayside there was Jennifer Moss who played Lucille Hewitt. She disappeared almost without trace – drink, drugs and rock and roll. It’s not surprising given the number of people who have been through the sausage machine runs into the thousands so I’m not surprised that some proved to be vulnerable.

Like any big team of people with the throughput of different faces over many years a fair number sadly fell by the wayside – Peter Adamson who played Len Fairclough and was famous throughout the nation fell from grace and disappeared. The last I heard was in a Sunday tabloid and he was living somewhere down south in a one roomed place. Chris Quinten who always had a touch of arrogance about him. If he didn’t fall by the wayside he drifted out of sight. He went to Hollywood and always thought he was a finer actor than he was, like some others on the Street over the years. A lot of them are inclined to play themselves and then get carried away with the idea that they are rounded actors and the proof is in the pudding.

The extras were a funny bunch in those days and there are probably people who’d say they’re a funny bunch now but in the 60s and 70s they were a very funny bunch. In the cannie I would sometimes sit at a table with a colleague and there might be two other people at the table, mainly men, mainly male extras. I was by then onscreen and had a recognisable face. If I could have a pound for the number of times I’ve had boring conversations with really boring extras, none of whom were actors in those days. They had mysteriously managed to get hold of Equity cards. Most of them were either plumbers, electricians, the brother in law of somebody. They’d sit there, recognise me and then regale me with boring minutiae of the extra’s work. I often wondered how they got their Equity cards. And the answer is too easy.

Bill Podmore the other long time producer who sadly died a few years ago. I first knew Bill when he was a senior cameraman, then he became a producer. I’ve known him a long time and I was delighted when he became producer of the Street, a job he did with a great deal of mental agility, charm, a tinge of having to be a hard man because dealing with contracts and hirings and firing s can’t have been easy. He was an able soul and liked to stand at the bar and indulge the other passion of pissing ourselves with laughter.

Harry Kershaw – HV Kershaw – the original script editor and later a producer for many years. I think he wrote it as well. He was just a funny, amiable, guy who was lovely to be with. It was always a pleasure to be in his company. He had wit, he had charm, he had urbanity. He was simply very funny. He did a good job. He probably took it seriously but he never, ever gave the impression that he took it too seriously. He never gave me the impression that the job ever created problems with the personnel, the management; he just sailed through it quite serenely, a charming, charming man and I miss him dearly. His death was another sad, sad loss.