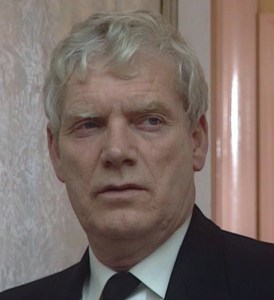 After training at RADA, Geoff Hinsliff appeared in many West End plays. He played characters in Coronation Street over three different periods from 1963 to 1997, but is best know for his role as cab driver Don Brennan, who married Ivy Tilsley in 1988.

I was not too long out of RADA, I left in 60 and went into Coronation Street in 63. At that time actors were terrified of soaps in that it killed you off. You feared that you’d never work again because of being in a soap. It was a steady job but after it you were virtually finished. That was the difficulty.

In the theatre knighted actors would turn up in jeans to rehearse, people in the Street would turn up in fur coats. I recall seeing Minnie Caldwell in the canteen in a fur coat and rings, she couldn’t get any more on her fingers and eating fish and chips. It was a very homely, friendly place. That was the kind of aura that there was around it. People would come in in the kind of clothes that you’d wear for a cocktail party. They did that especially on Wednesday, which was the producer’s run through. Even when I joined people used to dress up for it. All those things were utterly surprising from the rest of the profession. It all spoke of the difference and the basis was money and fame. Laurence Olivier could walk down the street and seven out of ten people wouldn’t know who he was immediately but Elsie Tanner ten out of ten people knew, that was it. It was fame in the sense of notoriety. I never went along with this. I thought fame was about doing something extraordinary like climbing Everest, that’s fame, you did something that no-one else can do that was a tremendous feat and you were famous whereas soap stars especially were , it was just that twice a week their face was on the box and people loved it and lived by it and practically treated it as reality. There are notorious stories about people ringing in to do with something that’s happening in the Street and treating the whole thing as real. One story that Bet Lynch, Julie Goodyear, used to refer to was that she was turned out of her flat in the Street, the telephone exchange was jammed with calls saying ‘Come to my place, she’ll be alright. We’ve got a nice room there, it won’t cost you a fortune..’.

In 1977 I came back to play Eric Bailey who robbed the Corner Shop. Julie Goodyear although she was one of the starry-type people, who dressed up, was extremely kind and helpful. In a way that made things more normal because that’s what you expect if you’re going into a series, you expect them to be as helpful as possible because you are new and they know the score. And she was and that was a change. I don’t remember anybody in particular being helpful in the first one I did. Actually over the years it has been learned that people in Coronation Street should make a point of being welcoming, because we all know now how difficult it can be to come into the Street. You’re surrounded by these legends, these household names and it’s very difficult to cope sometimes when you first come in. Everybody makes a point now of really welcoming people into the Street.

The third time I was asked to go in was in 1987. I did a thing called Brass with Bill Podmore who was producing and who also produced the Street so I was asked if I’d like to come in and I said ‘I don’t think I could be part of all that’ and he said ‘It’s changed vastly’ so I said I’d go in for a few, three or four weeks and see. So I did that and I found it very different. I found it much much better, much more civilised, much more calm on the money front and really quite enjoyable. So I said ‘Yes I’ll give it a go and see what happens. ‘ I was in for ten years, you never expect that. You think I’ll do a year, maybe two years wouldn’t hurt me and time goes by so quickly. As a jobbing actor, a job here for three weeks, a job there for six weeks a job there for two days, suddenly you have a year’s contract, you think this is forever, no problems but that year goes by so quickly.

You had to learn how to use the Street well. What they would use was what they saw on the screen. There wasn’t a great deal of ‘Look I think my character should this that and the another’. What they did invariably was take up and write what you were doing on the screen which was difficult. I’ve seen in other cases very good actors come in and they don’t know what to do because it isn’t in the script. That’s what they’re used to, you look at the script and that’s who you are. In Coronation Street you look at the script and you can play who you like and really the Street was set up originally with people playing who they were. They sort of did themselves, or did a character that they’d always done and then the writers picked up on that and wrote what they like about it. You have such a phase of development. Normally in television you did one and your character is set there. Over a period of five years your character can change completely and radically, mine did. People used to say that ‘When you came in you were so nice and quiet – now look at you’.

Don Brennan had gone downhill so far, he’d done the lot. Originally he’d tried to commit suicide in the car and lost his leg. He’d then had another bout of committing suicide in the garage when it went to pot and then of course finally he was quite beyond the pale and blown up in a car. I didn’t get many nasty letters. I did get letters saying ‘It must be difficult living with Ivy’ which is was for the character.

In that final stint there were obviously people who had a great following in the Street and were an institution as characters in the piece but it wasn’t the same. It hadn’t gone to people’s heads. In a sense people matured over the years and behaved in a different way. It was very difficult being that much of a celebrity; it’s very difficult to cope with your life. It is something you have to cope with and some people don’t cope with it very well. There’s nothing like previous experience. You see it most in the young kids who come in. A young boy comes into the series, an eighteen year old who has done very little if anything. Within three months all his mates are saying wow and girls are making offers and suddenly you can easily think, I really am terrific. I think it’s practically impossible for a young actor not to go through that phase, either off at the deep end and be a pain in the arse. At some point you’ll go through that and hopefully you’ll come out the other side. It really is a lot to cope with. Suddenly you are notorious and it’s very difficult.   But I think the cure like myself to have been around for twenty years and know who you are and then go in. Then I think it won’t go to your head.

There are an awful lot of people in the series who are brilliant and I underestimated that before going in. Being a soap actor is not a pushover by any means and they do a terrific job, some of them, and I have great admiration and couldn’t do it nearly as well as a lot of them, even though I was supposed to be classically trained. Furthermore there are some very good friends in it, people were different and friendly and out-going, there was a lot of the plus side. I stayed for ten years so it can’t have been that bad.

When I went in the first time, it was two a week. There was a lot of fun then but honestly four a week is very tiring. When I started in television which was 62 or 63, what you would do then for a half hour play you would rehearse for two weeks. Then you’d do it from top to bottom, like you would a play. And when I did that you had a fortnight. Now you do four half-hours in one week and the thing is, technology has only changed so far as it makes better pictures, it hasn’t changed in that it circumnavigated the working requirement. You’ve still got to learn the lines, find out where you are and what you’re doing and you get so little time to do it in. You don’t rehearse, you go in and the director says right and you say can we just run it through just for us and the director says ‘OK five minutes’ and then we’re on.